A Visit with Sue Eckstein 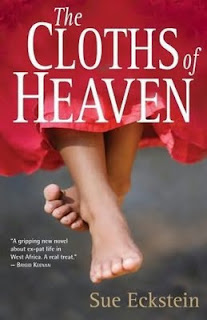 Sue Eckstein is the author of the book The Cloths of Heaven which I reviewed here.

Welcome to Thoughts from Botswana, Sue! You seem to love dialogue. Tell me more about the role of it in your novels.
I do love dialogue and I think I use it a lot in the novel as characterisation – the characters are described more by what they say to each other than by a narrator. I love the way a character’s single phrase can sometimes say so much more than a whole page of prose. When my writing is going well, it really does seem as though the dialogue writes itself.

You have so many characters. What is your process? Do you create character bibles? Did you map out all of your connections beforehand?
I did nothing as organised as that! I’m not a writer who writes lengthy back-stories to characters. I kept all my characters in my head and just brought them out when I needed them. The connections seemed to just happen by themselves. I’d start writing a chapter and somehow another character would want to come in.
As characters come and go in different chapters – there may be a gap of several chapters between their appearances – I had to make sure that their lives had moved on during that time – for example, that they weren’t sitting in the same café as they were before. At the end, I went back through the novel to check that it all worked and luckily didn’t have to make a lot of changes.
Bob Newpin is a vile character. Does he have a wider purpose than being just the local baddy? Are you making a political point with his character?
All the characters in the novel are capable of some kind of redemption, self-awareness or act of kindness, however small or insignificant - except Bob Newpin. I don’t think I ever thought for a moment that he’d have a redeeming feature. But equally I didn’t want him to be some kind of pantomime villain. There are Bob Newpins working throughout the world, often in developing countries where they seem to be able to get away with their bad behavior for much longer than they would here and I’ve met quite a few of them. I wanted him to get his come-uppance and I thought it fitting that it was another “fixer” who managed to put him in jail rather than the British or Bakinaban authorities.
There is a lot of the expatriate racism and condescension in your book that is quite common in expatriate communities around Africa. If you were the boss of the Foreign Service, how might you sort that problem out?
I think the racist and condescending characters in the novel are those who have never wanted, or perhaps haven’t been given the opportunity, to get to know any local people or the country outside their immediate environment. Those that do, including - eventually - Alec Moss, are capable of forging meaningful relationships.
I’m absolutely sure that people who are given the opportunity to forge those kinds of relationships and really get to know another country –VSO volunteers, Peace Corps volunteers, people who have spent gap years in Africa etc – will be very different kinds of expatriates or diplomats to the Barlings and others in the novel if they ever go on to work for the Foreign Office or any kind of organisation or company based in Africa. Or indeed if they end up working in the UK with refugees, asylum seekers or visitors from Africa.
If I were the boss of the Foreign Service, I’d make it a condition that all staff would have to spend some time living at grass roots level with local families in both rural and urban areas in that country before moving in behind the compound gates.
Humanitarian projects in your book are mostly a fiasco. Do you think that is usually the case? Are they fatally flawed? If so why?
I worked in overseas development for over 15 years, initially for Intermediate Technology Development Group and then for VSO so I’ve seen a lot of development projects throughout the world. It is easy to become cynical when, for example, you see brand new health centres lying empty because nothing was budgeted for doctors or nurses or even basic things like bandages or mattresses, when projects have clearly been planned with no input from local people. But perhaps things have improved in the 20 years since the book was set. More anthropologists are involved in project planning, the ideas of visionaries such as Robert Chambers are now quite routinely put into practice. I think one problem is that government and non-government organisations may be willing to give a very large amount of money for a big, prestigious project which will also bring in revenue and jobs for expatriates, but it’s very hard for local people to access small amounts of funding. I think the most useful thing I did during all my years working in development was to set up the Small Projects Fund in The Gambia. I managed to get some funding from the British High Commissioner (who was nothing like Alec Moss in the novel!) to set up the fund which the VSO volunteers managed. It distributed very small amounts of money to small, local groups – such as women wanting to set up a soap-making business. As far as I know, the fund is still going strong and I’m sure it’s made a small but significant difference to people’s lives.
How do you think your play writing has influenced your novel writing?
I wrote the novel before the plays. I’ve learned a huge amount about writing dialogue while writing the plays. The art is very much in what you don’t say rather than what you do say. Cutting and deleting is the key. In the novel I’m writing at the moment, every alternating chapter is a dialogue – with no description at all.
Sue, tell my readers in 25 words of less, why they should buy your book.

It’s got an intriguing plot and is peopled by characters who’ll stay in your mind for a long time after you put the book down. (25 words!!)

Sue, best of luck with your book and I look forward to the next one. Thanks for stopping by!
(You can purchase Sue's book HERE)
Posted by Lauri at 7:00 AM

Lovely interview, Lauri! And Sues answers were great. Im intriuged by the expatriate racism and condescension in the book... will look out for this one!

Very interesting, and having lived in developing countries for years (not in the foreign service) I know exactly what the writer is saying about attitudes and behavior of (some) expats. Fortunately, there are many "good" ones making a real and lasting difference in the lives of the people who need assistance.

Can't wait to read the book, which got accidentally not delivered. Have ordered again.

Jude- Glad you enjoyed the interview.

Miss Footloose- You're right there are many expats doing important critical work, in most cases I tend to not want to call them expats since that word has become so tainted by the other quite large group. Sorry your book got waylaid.

fascinating stuff lauri... i must say i'm feeling your writing process, and one of my favorite parts is "I kept all my characters in my head and just brought them out when I needed them. The connections seemed to just happen by themselves. I’d start writing a chapter and somehow another character would want to come in." ... i guess i share your suspicion re back story and that kind of labor! i'll try and find this book...intereseting material.