Thoughts of my Father 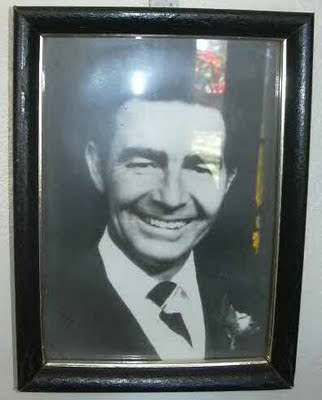 Today would have been my father’s 79th birthday. He died at the age of 50 from lung cancer after smoking Lucky Strikes for over 30 years. Most of my thoughts about my childhood are problematic, so I try to forget them, but today I want to not do that, I want to try and remember what I can about this man, about my father.

He was not well educated; I think he went as far as primary school. He grew up on a farm in rural Wisconsin. He escaped the farm by joining the navy and later the army, or perhaps in the other order. He fought in the Korean War and was awarded a Purple Heart medal. He was not one of those men who spoke about the war in all its glory. He never mentioned it. When my cousin, who fought in the Vietnam War, visited they would lock themselves up in a room and drink and speak of the things no one else could understand.

My father worked very hard at working class jobs. For most of the time that I can remember he was a long distance truck driver. He transported tanks of corn syrup, mostly, around the Midwestern United States. I don’t know if he liked this job. He was gone for most of the week sleeping in hotels, coming home only on the weekends.

He married twice. He married my mother, who he told me once was the only woman he’d ever loved. Unfortunately, she was flawed and harmed him in uncountable ways. He was left with five children and a job that gave him only two days out of seven to raise them. He married again. This time, as he also told me, “to get a babysitter”. He had shockingly bad judgment in choosing wives.

He liked to build things though detested instructions; I’ve inherited the last from him. He would buy DIY books only to get ideas, never to be read. So we had strange objects such as picnic tables that catapulted people on one side into the air like a seesaw when someone sat opposite them, and a braii stand people always thought was a far too elegant dog house. He once used a chain saw to change a station wagon into a baakie. He was the definition of a man who ‘could make a plan’.

A farm boy at heart, he loved to hunt. He’d hunt anything in season: deer, geese, squirrels, rabbits, but rarely had success. It was not about that, it was about being in the woods with his friends or his dog.

He was very patriotic. One of his many projects was to build a very tall flag pole. On public holidays he made a ceremony of raising his flag, the one he’d been given, the one that would drape his coffin, up that pole to blow in the wind high above.

He was a charismatic man, few people who met him stopped there; they went on to be his friend, often fiercely so. At his funeral, I remembered being shocked at the number of people. Many grown men wept openly, something I had never seen before. As they carried his coffin out the door of the church, stepping over puddles of melted snow amidst the first sprouts of green grass, honking could be heard and the gathering raised their heads to watch the high above V of Canadian geese on their way home, perhaps they were accompanying him, I don’t know.

So today I think about this man, my father. I know more about him and his motivations now as I too am an adult and a parent, a wife. But still I wonder what he thought about at the front of his mind and the tiny crevices too. I wonder what secrets he kept. I wonder what his dreams were, what regrets he had. I wonder if he raged at his life cut too short, or he welcomed it as relief after years of struggle and pain.

Today I think of my father, Chancey Eli Burch.
Posted by Lauri at 12:42 PM

Hi Lauri, thanks for sharing your memories and thoughts of your father..

Vanessa, thanks for your kind words, they mean a lot.

Karen- You're welcome. I just realised this morning today was my father's birthday and wanted to sort out my thoughts a bit. Writing does that.

This is a very touching tribute to your father, Lauri. He was an extraordinary man. He produced a daughter like you so how could he be otherwise.

I know so much about him after reading this and I can see through your eyes that his life meant something.

I am sorry you lost him when you were so young. I hope he knows what a wonderful writer and person you turned out to be!

You know, Selma, I wrote what I knew but I wonder do we ever really know our parents? Do we let them be human in any real sense? I wonder if my children really know me? We have to play a role, a lot of the lines provided by societal expectations. Perhaps when we are all adults is when we get to know our parents as humans. I didn't have that opportunity with my parents, I hope I'll have it with my children.

And thanks for your kind words.

This is a beautiful post, Lauri. And I think it would make for a beautiful novella: you paint such a nuanced portrait of your father: objective yet familiar, which is a tough ask. Well done and I hope it leads to something.

You wrote this story about your father so vividly, and with so many facts that I think you knew quite a bit about him. My father is 84, lives in Paris and now has melanoma. I feel terrible that I know so little about his past. I want to ask him many questions, but don't want him to think it's because he might not live too much longer.

Maxine- I never thought of this going any further. Perhaps I'll consider it.

Gutsywriter-Don't waste time, not because he's sick just because there is so little time for any of us.I think he would love to know you have interest in knowing him better.

Beautiful tribute to your dad, Lauri! Brought tears to my eyes...