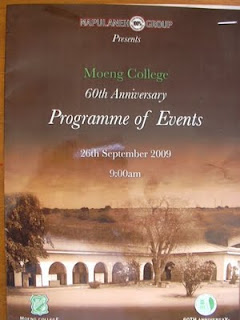 Saturday we drove off to the Tswapong Hills to attend the 60th Anniversary of Moeng College. It was also their prize giving and since both of our children attend the school, I had an important reason to be there.

Moeng College was the brain child of Tshekedi Khama, regent of the largest tribe in Botswana, the Bamangwato, from 1926 to 1959. In attendance at the ceremony on Saturday was his daughter, Her Majesty Semane Bonolo Molotlegi who is also the Queen Mother of the Royal Bafokeng in South Africa. She spoke of her father's wish to build a college in the middle of the Tswapong Hills in a quiet place near the stream and the waterfall, an environment conducive to learning. He started the long process in 1933 when he requested to build the school from the British Protectorate authorities. But that was during the Great Depression and money could not be found. When the Great Depression was over he attempted to begin his project but World War II broke out. It was only in 1947 that construction began on the school.
The tribe was asked to donate money for the college. A staggering 100,000 British pounds was raised from the tribe only. You must keep in mind that this was 1947 and this was money collected from people who primarily lived on subsistence farming and cattle rearing. It is astonishing to consider.
Tshekedi Khama used mephato to build the school. A mophato is an age regiment made of men who had gone through bogwera (initiation) at the same time. These men spent two years building the school in the bush without returning home.
Tshekedi was a visionary in many ways. On Saturday his daughter mentioned how he had been the initiator in negotiations to stop prospectors from searching for minerals in the then Bechuanaland. He was successful in stopping them. If he hadn't the history of Botswana would have been a very different one.
He was a visionary too when he built Moeng College. For the first thirty years the school was self-sufficient in food. It had its own dairy, butcher, bakery, garage, generator and orchard. The students were required to learn practical things as well as academic.
Tshekedi also had no time for the racism that flourished among colonial run schools. There was no difference between the houses for white teachers and black teachers and they all lived together.
The school flourished producing some of the more influential and powerful people of this country and even from other countries as there were students from all over Southern Africa at Moeng. Among the school's graduates are: Kgosi Seepapitso, former President Mogae, former minister and successful business man David Magang, Minister of Finance Baledzi Gaolathle, well known Serowe resident and BNF MP candidate, Ms G. Nthebolan ,and leader of the opposition in Parliament MP Otsweletse Moupo.
At the ceremony, the Queen Mother announced that her family, have decided to start a trust for Moeng College called the Tshekedi and Ellen Khama Trust Fund, and they donated P185,000 to start the fund off. 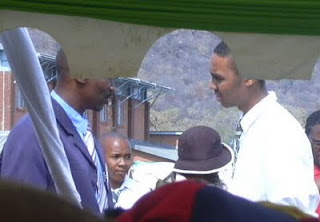 (PHOTOS: Up- the Boy with his father, Down to left- the Boy receiving prize for academic excellence from the Queen Mother, the Girl with her father receiving her prize from Miss 60th Anniversary) 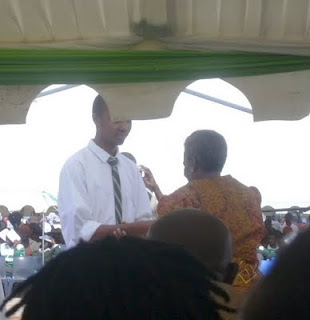 On a personal note, both the Giant Teenagers received prizes. The Girl for best debater and the Boy for best in biology and another given to him by the Queen Mother herself, for academic excellence. 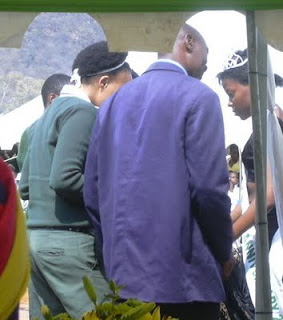 Hats!
Horns!
Confetti!
Congratulations to Giant Teenagers, and you and your husband as well, for a job well done!

You must be busting out with pride over the achievements of your beautiful giant teenagers. What a wonderful school, the world needs more visionaries like the man that founded it.

Thank you for sharing this special day with us. I love to see photos and it brings back memories of when I lived in Africa as a little girl.
How proud you must be. How old are your kids?

Bonita- Thanks for the party!

Elizabeth- The school was quite an accomplishment in its day. The school had a few difficult years but it's coming back. Lately it has been in the top five schools in the country.

GutsyWriter- Where did you live in Africa? My daughter is 17 and my son 15, he turns 16 at the end of October. My daughter is starting her national exams in a few weeks. It's quite hectic as the results on those exams will decide if she goes to university and what course the government will sponsor her for.

I loved this poet Lauri. It sounds like there is a novel in it for you: a group of boys, out in the bush, becoming men and building something so wonderful out of that journey. Dedicate it to me :)

I lived in Nigeria from 0-6 years, although my mother gave birth to me in Denmark, where she was from herself.

Maxine you might have a very good idea. If I steal it I will definitely mention where I got it.

Gutsy Writer- I've never been to Nigeria but no many very talented writers from there.

I thought more about this post and thought perhaps I gave a wrong impression about Tshekedi for people who don't know him. Like every person he was complex- the born leader and visionary. But too there are those who despise him. He was very authoritarian. He was against the first president of Botswana, his nephew, marrying a white woman, he was very cruel to the Bakalanga, and he is well known in colonial circles of the time for beating a white man at the kgotla. But too I think he is under-represented in our history.

You must be so proud, Lauri. Your children are a credit to you and your husband. Sounds like they're going to have very bright futures!

And Tshekedi Khama was the son of Khama the Great, and the uncle of Sir Seretse Khama, the father of Seretse Khama Ian Khama!!

And Tshekedi Khama was also a persecutor of the Kalangas!!!

Yes Anonymous, I did mention his treatment of Bakalanga. I thought Tshekedi's father was Sekgoma- perhaps I'm wrong.

Khama the great, had two sons; Sekgoma who was Seretse's father as I noted. S. might have been to Khama's wife MmaBessie(not so sure) and Tshekedi Khama was born to Khama the great's last wife.

Can anyone enlighten me about the origings of the Moeng college's name, who was this Moeng and what was his relationship with the Khama clan?
It is worth noting that in ancient China-Cambodia-Thailand there was a Moeng Kindom and chieftainships and some of the names of the princes were Kham. The Moengs are still very much alive in Cambodia, Thailand and neighbouring countries where some regions are still called Moeng. How are they related to the Botswana Khama and Moeng clans?

I do know that Moeng College is named after the area where the college was located. I don't think it is a family name. I'd be very surprised there is a connection with Cambodia but who knows?