Saturday afternoon was very hot. At about 7pm my husband said he was going out to water the garden. My son and I were watching television. At about 8pm, the wind started to pick up,but at first I hardly noticed it. But then it took on an edge, the sound upped a few notches and I started to pay attention. I went outside to look for my husband but he was already on his way back inside. For the next two hours we had the worst storm I've ever seen since I've lived in Mahalapye. The wind just kept increasing and increasing. At first there was dust and then the rain started. The wind was beating the rain so hard against the eastern side of our house water came in the air bricks. And then the hail began. I was sure the windows were going to break, the wind whipped the hail with such force. In the middle of it all the electricity went out.

When the storm finally stopped about 10:30 pm, we opened the door and looked out into the pitch blackness. We could hear people talking in the distance, saying how they nearly died but we could see nothing. It was only in the morning that the devastation became clear.

Roofs were peeled off their rafters and in some cases like at our neighbour's house the rafters broke and the roof blew away. Tree branches lay everywhere. Big, old, strong indigenous trees were lifted from the soil, roots and all, and thrown to the ground like so many sticks. Electricity poles were knocked down all over the village. Four poles leading out to the water treatment plant were knocked down cutting off the water supply for the village until Tuesday.We've heard from neighbours that three people died in the village. Someone old us a tree fell on the house.

We were lucky. Our vegetable garden looked as if a lawn mower passed through it. A few roof tiles were pulled up slightly. Our mogonono tree lost a lot of its branches. Most of our tree lost their leaves making it look like early spring again instead of mid-summer. Our power was out until this morning. But otherwise we were all fine.

It was scary and reminded me of the tornadoes of my childhood in the Midwest of America. I'm glad it's all over and life is pretty much back to normal but it certainly won't be forgotten very soon. 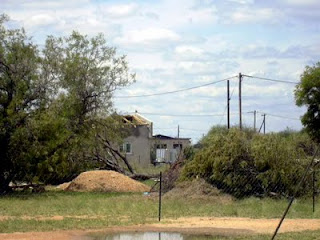 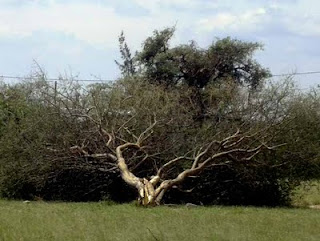 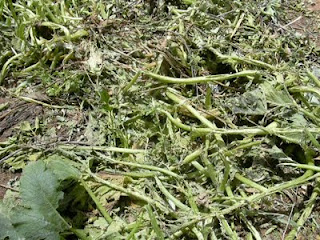 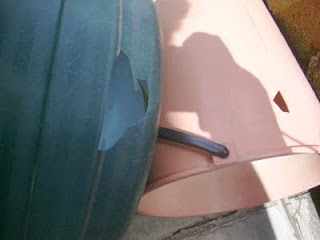 This sounds very scary, Lauri! I'm glad you are alright and that things are slowly back to normal. I can't even imagine...

wow!! Quite terrifying! Sorry to hear about all the damage, even lives lost...I'm glad you weren't home alone, at least - some company always helps!

Well it's over now, so that's one good thing. The house in the photo is my neighbour's. She was just here not knowing how she'll manage to fix it. I was surprised to hear that the disaster committee said they could not help but yet yesterday a man from the President's office said he was sent here to see what happened and what could be done. In the meanwhile, they're living in a donated tent.

I completely identify with this post. We had a huge windstorm here a few weeks ago which resulted in our neighbour's tree splitting and hitting our house (right above my bed). Weeks later, I still tremble when the wind starts blowing and I jumping at large noises.

So glad you and your family are okay. Nature can be scary.

What a storm! It sounds terrifying. I hope you never have to experience another one.

We had a storm too, nothing like that though, what a nightmare. I was concerned about the water coming in through the bottom of the french doors and mad that I had to use bathroom towels to sop it up. I feel like a big baby now. Glad you weathered the storm, at first I thought you were going to say your husband got lost! Glad that wasn't the case.

The whole of Southern Africa is being pummelled by these terrible storms. I'm wondering if this is the beginning of climate change.

An update- I finally got news last night having tv again and 500 houses were damaged in Mahalapye but no lives were lost- thank god. Radio mall was a bit too active I guess- sorry for the mistake.

Oh my! Are you sure you aren't in the Missouri USA?

That is scary. I am so glad you and your family are OK. How sad about the people who were killed. What a ferocious storm.