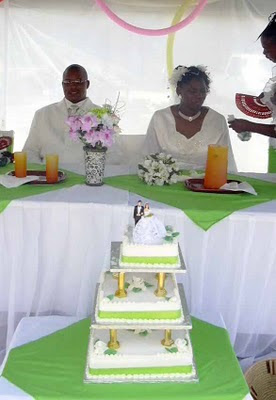 As my dear readers know, I spent my Christmas at my husband's home village of Xhumo where his youngest sister was getting married. For those outside of Botswana, Xhumo is a village located southeast of the Okavango Delta about 150 km west of the diamond mining town of Orapa. 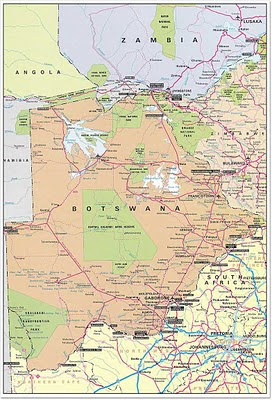 When my husband was growing up in the area, the Boteti River flowed every year and the area was lush and green. That doesn't happen anymore. I'm not sure why. Some say the mine used too much water, some say a misguided rice growing project near Maun caused the water to disappear. Whatever the reason, Xhumo is now a dry, dusty place. When we were there there wasn't even water in the taps despite all of the promises of the politicians just a month or so ago during elections. The people of this area are primarily Bakalanga. 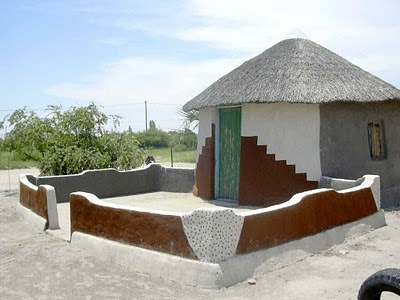 For people outside of Botswana when the bride wears her white wedding dress and a big tent is put up we call it a white wedding. This wedding was held at my mother-in-law's compound where a big tent was erected and the mud houses in the compound were painted. The house above was designed using reddish/brown soil and white soil mixed with water. There are different formats for white weddings but for this one, in the morning we all went to 'church' which was at the local primary school. After church the wedding party which consisted of about ten bridesmaids and their ten groomsmen, all in their first outfits bought for the occasion by themselves, parade around the village in the back of open baakies (trucks) hooting and yelling.
When they arrive back at the compound, they are greeted with ululations and they usually have a dance to the big tent. Then speeches are made. In this case, the spokesperson from the bride's family introduced the relatives that were present and then the same happened for the groom's family. Then both the bride and the groom spoke.
Then lunch is served. It is usually seswaa (pounded meat) from a cow or a goat or in most cases both. It is served with samp (boiled corn) or rice and salads (usually butternut and beet root).
After lunch the wedding party go to change. 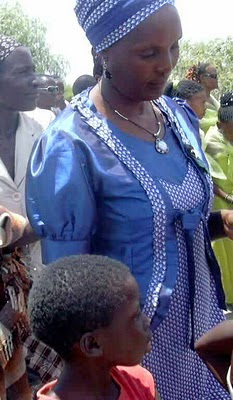 They usually change into traditional clothes, which in Botswana consist of various designs of a cloth called German print (see photo to the left) . The history behind this material is cloudy but it is considered the traditional dress here. It normally comes in brown and blue though lately it can be found in other colours such as red. Dresses and two pieces made of this material are called letaise.
When the wedding party comes back there is more dancing. Then dessert is served. It is usually trifle. After this there is dancing with the DJ. This can go on until quite late in the night, especially since there is usually ample amounts of traditional beer available. Sometime near evening the couple were taken to the side to be given advice from the elders. This was slightly differnt than other weddings I've attended where it is usually only the bride who is taken to the side to be told by the elder women in the family about how a wife should behave.
Cooking is done by members of the two families. Tents and chairs etc. are usually rented. There will be two big celebrations like this- first at the bride's family's home and then at the groom's. It is very expensive and the bulk of the cost is carried by the couple though each family pitches in what they can. Usually contributions are made well in advance and meetings are held to confirm how things will progress. In this case the next celebration will be at the groom's place on New Year's Day in Seronga, a village in the north near the border. 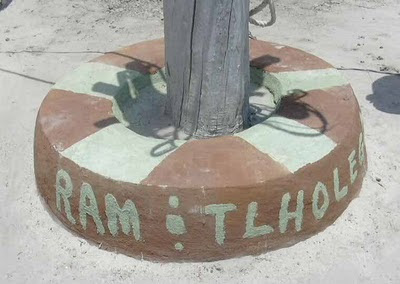 i love Botswana! what a wonderful event, and i love the historic context. Are you going to the Seronga occasion?

Thank you for telling this; I'm now a little less ignorant about where you live.

I must say the lack of water (and its mysterious cause) is troubling.

Love the pictures and the words to go with them. As Elspeth said, I feel less ignorant about Botswana.

Very interesting, Lauri. And thanks for the pictures; they made it much easier to visualize.

The lack of water there and elsewhere is very troubling. And the world is so slow to respond to this and other environmental problems.

Are white weddings the norm?
Food, sounds great—butternut and beet, yum!
Do you mention the Bakalanga because you feel there is footdragging on the water problem because they are the primary people?

Bonita I can't really say if white weddings are the norm, but they are very common. When I owned my printing and publishing business I had five staff members and three of the women got married and all of them had white weddings. There are people who just get married at the magistrate's court. That's what we did and had a small party.There are also traditional marriages.

No I mentioned Bakalanga because I'm not sure if the talk given to the couple is unique to Bakalanga or perhaps just my husband's clan. I've attended many white weddings in the village where I live and always it is the woman who gets the talk. But too I usually am attending the weddings at the bride's house, so perhaps that is it. I live in a village which is predominatly Bamangwato.

As far as the UN goes, it seems the reasons for their priorities on the water issue are political, or worse. I won't say any more because I don't want to delve into politics.

I enjoyed reading about the wedding and wanted to ask whether most guests attend both parties. Presumably they don't.

Miriam- You're right most guests don't attend both if, as in this case, they venues are far apart. Sometimes they're in the same village then they might. In our case, close family members and a few others will travel to the other ceremony.

The water situation in Xhumo is complicated. They used to have nice water as they had a borehole. But then it went wrong- it became very sulphur smelling and awful. Perhaps it was overuse of teh borehole. Now they're trying to get water from another place. There are currently quite a few water projects in the works in Botswana; some very large damns etc. So hopefully water issues will be sorted out. Also water is currently under three different departments depending on where you live. This too is being sorted out to some extent. I think it has a lot to do with growing pains in our case.

I really enjoyed hearing about this. I like how the elders pull the bride and groom aside to tell them how a husband and wife should behave. So interesting too about the German print. I wonder where it came from originally. Thanks for such a fascinating insight into your world!