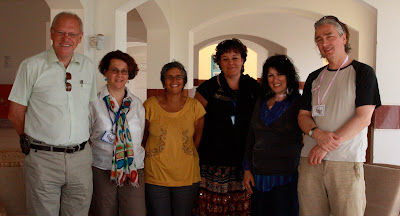 Thought you'd like to meet the wonderful writers I am here in El Gouna Egypt with. In the photo above from the far left: Mr Nigel the teacher at the school where we did a reading, Tiziana Colusso,Seni Seneviratne, me, Elmaz Abinader and Kevan Manwaring.

Read the El Gouna Gang's bios below:
Kevan Manwaring is an author of over a dozen books, including poetry, fiction and non-fiction. He teaches creative writing for the Open University and Skyros Writers Lab. As a professional storyteller he has performed in many venues across Britain and abroad, including USA, Italy and Malta - recently appearing on BBC TV. He lives in Bath, in the south-west of England. While at El Gouna he is working on a desert-based novel. His website is: www.kevanmanwaring.co.uk


Seni Seneviratne is a widely acclaimed poet and live artist of English and Sri Lankan heritage. Her poetry collection, Wild Cinnamon and Winter Skin (Peepal Tree Press 2007) has been described as “a virtual master class between covers.” Her performances combine spoken word and a cappella song – “…folk-tinged numbers that take all the air out the room, and make everyone shiver….” Seni has recently released a CD of poetry and song. (Which is fantastic BTW! I've bought one and am bringing it back to Botswana.)

Author Elmaz Abinader has won the 2002 Goldies Award for Literature, a PEN/Josephine Miles award for poetry and two Drammies (Oregon’s Drama Circle) for her performances. Author of a Memoir, Children of the Roojme, a collection of poetry, In The Country of my Dreams and several one-woman shows, Elmaz recently performed her play, Country of Origin at the Kennedy Center. Her forthcoming works include a novel, When Silence is Frightening and a memoir The Water Cycle. She is a co-founder of the Voices of Our Nations Arts Foundation and a professor at Mills College.(And (!?!) was mentored by Toni Morrison- I really AM NOT jealous)

Tiziana Colusso (www.tizianacolusso.it) is an Italian author of prose, poetry, non-fiction writing and fairy tales. She studied Comparative Literature in the Universities of Rome and Paris. She is from 2005 an elected member in the Board of the European Writers’ Council, the Federation of Authors Associations of all European countries, based in Brussels. She is the Editor of FORMAFLUENS- International Literary Magazine (www.formafluens.net). Her last book, La lingua langue , is a collection of her poetry translated into ten languages (Arabic, Bengali, English, French, Japanese, Latvian, Romanian, Slovak, Spanish, Ukrainian) in occasion of international Festivals and Meetings. The book is published in collaboration with Associazione Eurolinguistica of “La Sapienza” Rome University. In El Gouna she is working on a book that collects reports from her travels: the title is La manutenzione della meraviglia (The Amazement Maintenance). (And has written the most beautiful children's book EVER- publishers: take my advice- get this book! Mark my words on this)

So that's us. It seems amazing that we are nearly half finished with with our residency. Will be sad to see the gang members go their seperate ways.

What a lovely bunch of people with very impressive bios. I hope you all stay in touch.

Thanks for sharing with us who you're sharing your time with! It's certainly a group of very accomplished writers. Enjoy!

Yes our group is quite good. The women especially are having a fabulous time together.