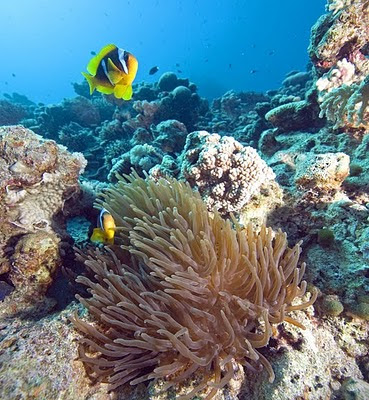 Today I went snorkelling in the Red Sea. The photo above is exactly like it looks under there. It's incredible! We went out to a coral reef about an hour and half from El Gouna. You can see all the way to the bottom so you feel as if you're flying over this wonderful hidden world. The coral is in all sorts of colours: lilac and yellow and bright green and royal blue. And the fish will not be overshadowed. I felt like I was swimming in an aquarium. Fish swam around me. I flew above a sea turtle. I spotted a large black sea urchin hidden in its undersea cave.

At first the captian of the boat would take us around the area, but then he'd leave us to look for ourselves. I loved following a fish, watching what it did, how other fish interacted with it. It's like a fish safari. I never wanted to get out. We stopped at two different reefs and in both I was always the last out of the water. If I had my way I'd still be there now.

We saw dolphins on the way out though they didn't swim with us. The captian of the ship said that on a recent trip a large group of dolphins stayed and swam with the tourists. I learned in Namibia that dolphins are impossible to photograph, at least for me. By the time I click they have already gone back under. Let's play a game- find the dolphin in the photo below. 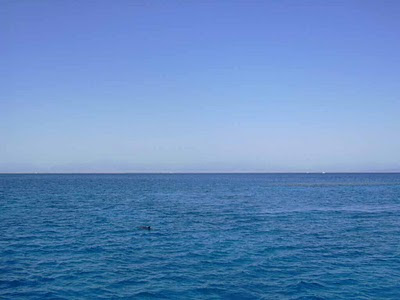 This snorkelling trip has opened a whole world to me. I love being in water, I love swimming but this is something else. After I got out of the water, I started asking people with me which other places they have gone snorkelling. I now have a list of great snorkelling places I intend to visit before I die- Aruba, Thailand, Mexico...and I'm going to start by going back to Mozambique. I really cannot believe that I've lived 46 years without finding out that such a wonderful thing exists. My head is spinning with the new world I've discovered.

There are plenty of things I am thankful for about this writers' residency, most of which I never expected, but being introduced to snorkeling might end up being one of the most important.
Posted by Lauri at 4:13 PM

I've snorkelled in the Caribbean. Magical.

I am afraid of scuba-diving. But I adore snorkeling. The best place ever, for me, was Jamaica! Glad you discovered how truly lovely it can be, and that picture! Holy smokes is that beautiful!

Wow. You will have to come to Australia one day and go snorkelling on the Great Barrier Reef - there's nothing like it.

You guys must all give me your best snorkelling places so I can add them to my list. I've added Jamaica. Where in the Caribbean Elspeth?
Maxine- I've already put Australia on my list esp. since I know so many writers there. Meeting writers and snorkelling seems to go hand in hand in my life.

I adore snorkelling. The coral coast on the Fiji Islands is just magic for snorkelling. So is the Great Barrier Reef in Oz as Maxine said. Glad you had such a good time.