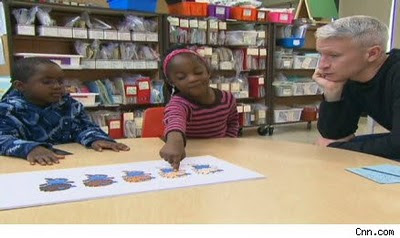 This morning I was watching CNN and Anderson Cooper was reporting on a recent study on racism among children in America. The children were shown pictures of five identical cartoon children, their only difference was the colour of their skin. Then the children were asked questions such as "Who is the dumbest child?" "Who is the smartest child?", "Who is the bad child?"and "Who do you think people would say is the most beautiful?"

For both black and white children there was a bias toward good attributes being assigned to the lighter skin tones and negative attributes beings given to the darker skin tones. For those who Spike Lee described as "drinking the rainbow Kool-aid", those who thought a black president would mean the magical disappearance of racism , I guess such a study will come as a bit of a shock, a shock that shows little has changed in America. For people on the ground, especially those with darker skin I doubt there were any surprises.

Here in Egypt, from what I've seen in Hotelworld , the lines between people are well defined and the amount of skin pigment seems to be the deciding factor. I doubt I've ever been to a place where those lines seem to be so absolute. At the hotel reception desk, you find the lightest skinned Egyptians. The next shade is found in the restaurant serving us food morning and night. A bit darker and you will be cleaning the rooms. The next shade are the security officers and the darkest skin of all and you will find them on the golf course mowing the grass or applying the ubiquitous chemicals the massive field of green requires to keep alive in the desert.

It seems unbelievably cruel to have a life defined before you get started. I found it even sadder when the little black girl in the study was asked "Which child is the ugliest?" and she pointed to the darkest skin picture. When Anderson Cooper asked her why, she said "because black skin in nasty". She said it while looking at her own arm. Where did she learn that? But, more importantly, how can it be fixed?
Posted by Lauri at 5:59 AM

Unfortunately too much stereotypes happen in real life. And children are quite easily influenced.

I'm surprised that the preference for lighter skin is seen even in the middle east where one would think the darker colours would dominate and be more acceptable. Any theories as to why this is? Is it because the staff at the front desk where you are would be dealing with foreign, light skinned guests?

Very sad. Poor little girl... I am often also surprised and frustrated (being a bit of an idiotic idealist) when I encounter members of the young generation who are still fully programmed into the mode of racism and non-acceptance!

Mmm I think pink babies are ugly ... well if it was not the skin it would've been the hair or length. Good idea for a story book series :-)

One of my best friends is Indian and is fairly light-skinned. Yet her sister is darker. My friend is considered by her entire family to be the more beautiful of the two. To me there is virtually no difference between them. They have that similar/indistinguishable look sisters often have. I don't know where this kind of thinking came from but it seems to be prevalent in the black communities I have come across.

Ironically, many white people are darkening their skin with spray tans. It is seen at the moment as a sign of beauty. I don't understand that, either.

Some thoughts/information:
It's not always the job that comes with the color, but also the color coming with the job! If you stay inside all the day (like receptionists), you will not get a sun tan, but if you work on the golf course the whole day in the sun, skin will automatically get darker.....
And yes, there IS discrimination based on skin color in the Middle East / Egypt: the "Arabs" (lighter color) consider themselves better/higher than the darker people from the south (coming in from Sudan).
But wasn't it the same some (hundred) years ago in Europe? Why did people put powder in their face to make the skin look lighter? A light skin is a sign that you don't have to do the (hard) work outside in the sun.....
And this is also the reason why you find creams to whiten your skin in every single supermarket, drug store and pharmacy in Egypt

I hadn't hears Spike Lee's quote before, but I he was certainly right. I know I allowed myself to hope that the election was a signal of change, but my trips back to the States since then have shown me that, if anything, things are worse. Rodgers and Hammerstein (I think) wrote in "South Pacific" "you have to be taught to hate and fear." I wonder if they realized the teaching starts so young.

Oh my goodness, that is awful, just awful. It is very heart breaking, especially when black children regard their own skin as being 'nasty'. How does one break such ingrained patterns,it is what children see around them and they believe it with innocence. Heart breaking.

Dagmar you do make a point. Perhaps it is an ancient thing somehow based on people who didn't have to work- I don't know. I do think the messages kids get can be so subtle but very ubiquitous. This is perhaps why it's so difficult to combat. It's not like someone using the N word, it's not lynching, it's not seats at the back of the bus.

Sue I agree racism has increased in USA. When there is a FB group that is about praying that President Obama dies, there is something wrong.

I don't understand how a world can let skin color decide placement and treatment. I DO understand self-hatred. Women especially have to deal with this all the time. We are told over and over what we are supposed to look like. But that's in addition to what this girl is talking about...What's amazing to me is that consistently, black women in American have higher self-confidence than white women. Thank God! After all the world takes and takes, at least it doesn't break the spirit.

That child...looking at herself and calling her skin ugly. Impossible to ignore. What do we do? WHAT DO WE DO?

I should try it sometime on Android. Hope it will be as much helpful as these useful source WritePaper.Info This service will write as best as they can. So you do not need to waste the time on rewritings.