A trip to Luxor

Last year on my way to the Cape Town Book Fair I missed my connecting flight in Joburg because of bad weather. I ended up missing the first day of the fair so when I finally got there I rushed to the first author talk going. It was South African writer Marie Heese reading from her novel The Double Crown, Secret Writings of a Female Pharaoh. I hardly knew anything about Egypt and its history but suddenly here was an intriguing novel about the female pharaoh Hatshepsut (Hat-shep-soot- more than anything I'm writing that pronunciation for me as I am struggling to keep it in my mind.). A little less than a year later I stood in her temple and had my photo taken next to her bearded statue. And who said life does not have a plan for us?
(Excuse the photo- my aim was coolness and comfort- I believe I have officially become a middle aged woman.) 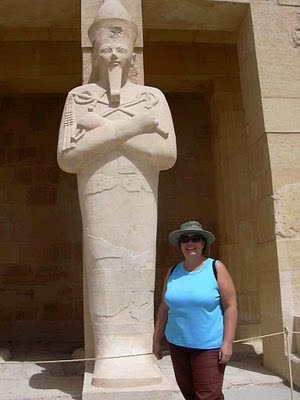 Yesterday at 5am we set off for Luxor, a town along the Nile River. It's a fascinating drive as you head south along the Red Sea coast and then head west across the desert, passing through beautiful mountains. 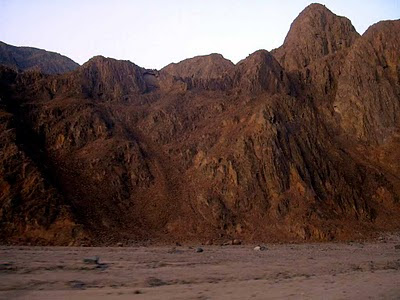 Then suddenly like magic everything turns green. Bougainvillia and oleander bloom along the road and channels direct Nile river water to the rich dark soil in the tidy plots where crops grow. 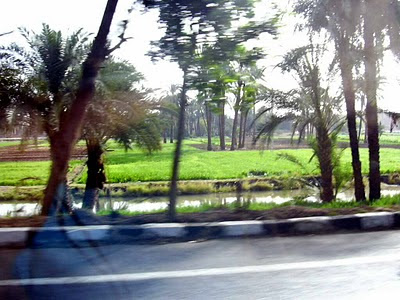 Then we arrive in Luxor. The name is synonymous with the ancient Egyptian artifacts, the Valley of the Kings, but it is a town, large and modern, home to over 300,000 residents. In Botswana, many people build houses and then in the hope that more money will come and they will be able to extend it, they leave connecting bricks sticking off to the side where the next room can be added. Here people build upward, but with the same idea. The tops of many of the houses look unfinished, they are waiting for the money to build the next floor. Our tour guide, Marea, told us families often build flats for their children when they get married, on that unfinished roof. In the meantime it is a place to position the TV satellite or string the clothes line. 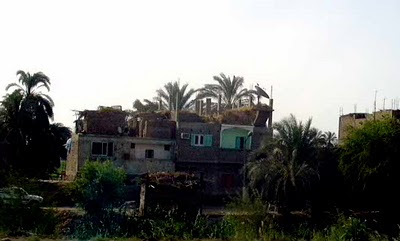 Our first stop was Queen Hatshepsut's temple. It's an impressive building built into the hill, behind the Valley of the Kings. It's three platforms up to the top. 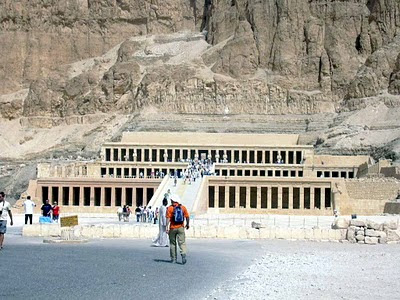 Hatshepsut was pharoah from 1473-1458 BC, in the 18th dynasty of ancient Egypt. She was the regent for her stepson Thuthmose III, but after a few years of acting as regent, she declared herself king. Her reign was a peaceful one with an unprecedented amount of building. She also commissioned many expeditions. One of the most famous, depicted on the walls of her temple, were to the Land of Punt (now believed to be somewhere around Somalia) in five, 21 metre long boats. They brought back all sorts of exotic plants and animals including 31 myrrh trees which were planted in her temple. At the time, the temple must have been a lush place with many trees and ponds. 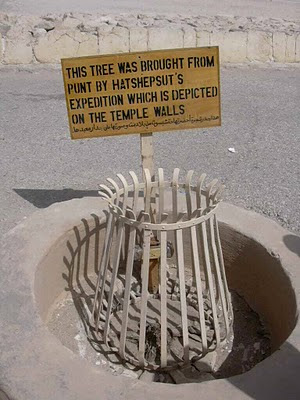 In many of Hatshepsut's statues she is depicted with a beard and in the kilt of male pharoahs. We discussed this at the temple and Seni made the observation that it was likely not much different from today where women who want to be taken seriously in the corporate world must dress in the clothing of men- power suits.

After Hatshepsut's death, her stepson, Thutmose III, attempted to destroy all references to her legacy. A symbol called a cartouche is like a pharaoh's stamp with his or her name on it. Thutmose III tried to remove all Hatshepsut's cartouches as well as removing the faces of all images in her temple. One cartouche remained. Below is a typical image of Hatshepsut wearing the clothes for a man, her face has been removed. 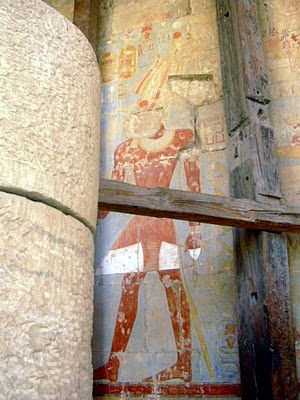 We later went to the Valley of the Kings and visited three tombs which I have no photos of as it is illegal to take photos there. It is amazing the bright colours and clear depictions on the walls of the tombs thousands of years old. They're beautiful.

From there we went for a boat ride on the Nile River to cross to the East Bank for lunch at the St. George Hotel. 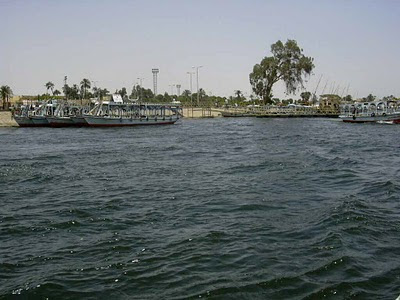 I have to be honest, by the time we finished lunch my energy was dropping and I couldn't retain a lot of what we were told about Karnak Temple. Luxor needs, at the very least a week, there is just too much to see and trying to do so much in a day leads to information overload. Below are photos from Karnak Temple. 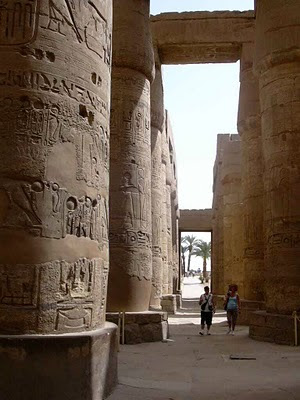 This obelisk is the largest surviving obelisk in the world and was made by Queen Hatshepsut. It is made from a single piece of rock, over 29 metres high (97 feet). 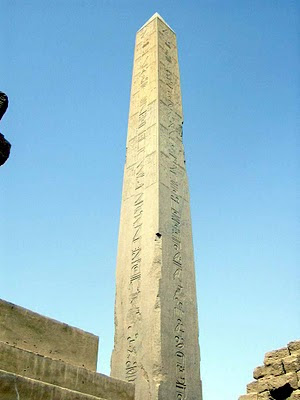 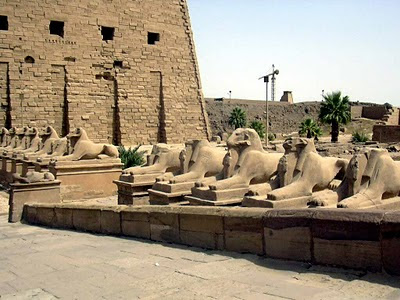 This is a piece of an obelisk also commissioned by Queen Hatsheput. It depicts the god Amun-Ra blessing Hatsheput, who wears the clothing for a man and has a distinctly male shape but up close the carving shows a beautiful female face. 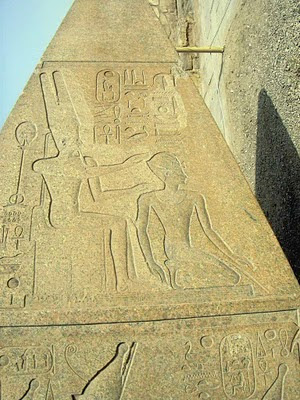 What a rich country Lauri! I feel like I've just re-read The Double Crown! Thank you for the great pix. It looks like a country so rich in history you need a year to absorb it all.

These pictures are magnificent. I have no words.

Wonderful post! I chuckled at your post about your photo and having reached middle age. it seems I have too, wearing hats I never would have thought of in my youth, lol

It is so beautiful. I am frequently amazed that so much of the history in Egypt still stands. It's brilliant.

I was there about 25 years ago and would love to return. Your photos are great, but no photo can really capture the enormity of the place.

Beautiful photos, Lauri. For no particular reason, Egypt was never high on my list of must-see places but I clearly need to rethink that. It's been great going on this trip with you.

Sue- I always thought a Nile cruise seemed so romantic but please be advised it may not be the best idea if you decide to go. Waiting for everyone to get to a place for the guide to explain would drive me insane.

We got a small bus for four of the writers to take us from El Gouna to Luxor with a guide and lunch at the hotel, and drinks in the bus included and it cost us 100 Euros. It was a fantastic deal since our guide was absolutely passionate about Egyptian history. I definitely want to go again with my husband and if possible I will use the same tour company, Pro Tours. I'd stay in Luxor at least a week. One of the writers here managed to get an apartment when she visited before for 90 Egyptian pounds per week (1 euro=7 pounds). I think that's the best thing to do, get an apartment and hire a personal guide.

It was funny because our guide's husband was also a guide. She in English and him in German. It is astounding how Egyptians make such an effort to speak the language of the tourists but few tourists can say anything in Arabic, me included.

Thank you for showing the pictures and telling us about your amazing trip. How fabulous! Oh, I'd so love to go there. Wow. Wow. (And you look quite cute in the first picture.)

I absolutely loved going to Luxor and Deir el Bahri. Of course, it helps that I'm writing a novel on Hatshepsut- I've been obsessed with her since I was about 12. I actually shed a few tears when we pulled into view of her temple.

Wonderful photo. I've been to Luxor once and it was so very romantic. Wish I was with my BF then.