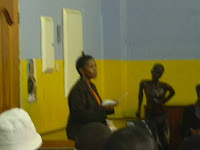 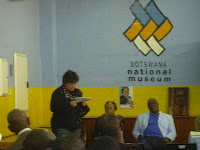 (Pictures: right- me reading, left Wame Molefhe reading at National Museum Gaborone)
On Sunday, we were off to Gaborone for the Bessie Head Literature Awards Ceremony. I won first prize in the short story category so was expected to give a short thank you speech and read from the story. I am nostalgic for the time when writers could write and then hide away hermit-like, it was almost expected that a good writer should not be seen or heard from, part of their charm. Now everyone must be a celebrity; bright and witty, able to stand in front of a crowd and entertain. I am not that person, and I suppose it will act against me in the future if it hasn’t already. Nevertheless, I went and as usual I was dead nervous when it came time to stand up and do what I was supposed to do.

I don’t mean to disparage the prize in anyway, though. This is the second year that the prizes have been awarded and they are now an annual event. They are run by the Bessie Head Heritage Trust and the prize money is sponsored by Pentagon Publishers. They are the only publisher in Botswana that has taken it upon themselves to nurture the growing numbers of writers in the country and they must be commended for that, especially given the fact that they are a small publishing house. Not only do they sponsor the prizes (which are by the way quite good at P2000 for novel, P1500 for short story and P1000 for poem) they publish the winning entries. This is very important in a country where for years only books destined for the schools had a chance to be published. Kudos for Pentagon! Their commitment to writers is one of the reason that I write for them. My Kate Gomolemo books are now published by them and I do educational writing for them, as well.
(But don’t think that there was any nepotism involved in the short story prize- the judging is done by the Trust using independent judges from the University)

The winner in the novel category was a charming young man named Phidson Mojokeri for a novel entitled Curse of a Dream. He looked barely out of school and was so thankful that his dream of becoming a writer was coming true.

In poetry, first place went to Ms Ita Mannathoko for a poem called “Kgalagadi the Great Thirst”. She was not in attendance. The gathering was told that she lives in America. Her poem was read by UB academic and Trust member, Leloba Molema. Mma Molema wondered if Ita might be longing for Botswana as the poem described the country in such a loving way.

My story that won is called ‘The Solar Heater’. It is about a British man who comes to Botswana to work as a lecturer at UB, but bad choices leave him alone and unemployed. He takes up a job at a poorly funded private primary school in Mahalapye. There he meets Chandrika, a young Sri Lankan girl, who has her own sad past to overcome. Together they are ‘saved’ by a solar heater science project.

Short Story
2nd Prize: Mr. Tlotlego Gaogakwe for A Wife for Lindile’s Husband
3rd Prize: Ms Wame Molefhe for Will it Ever Rain?

Ah, the days of the 'invisible writer'... long gone. I too dislike this whole celebrity business.

Thanks, JD. I only have very local success right now, I wonder how I'll cope if I ever move out of the borders of Botswana. Eish!

Congratulations, Lauri, how very exciting for you (and well-deserved, I might add).

I do have a question, and I hope it isn't rude (I don't mean for it to be) but here goes: when you were doing your reading, do you speak the Botswana language or English? What about when you write?

The reason I ask is that, as someone who does not speak a second language, I can only imagine your adventures happening in English (how's that for narrow-minded???) I would love to hear more about life in Botswana (and I've recently started reading my first #1 Ladies Detective Agency book, so that is feeding my curiosity and desire to see it all for myself.

Karen, your question is neither rude nor stupid. My Setswana is atrocious- unless you want to talk about bread, axes, or trees, and you'd be surprised at how little time people actually spend talking about bread, axes and trees.

The BH prize is for writing in English so everyone was reading and writing in English. In Botswana, English and Setswana are the official languages. This is good and bad. It does let lazy people like me get by without being fluent in Setswana despite having lived here for almost 20 years. Shameful actually.

Congratulations on your win, and on getting up there and reading despite your nerves! Don't put yourself down for it; it happens to a lot of people, but those who do it anyway deserve admiration.

Thanks El. You don't really have a choice at these things- you MUST get up there so don't give me too much credit.