Things to Do When Waiting to Write- Handy Tip No. 1: Have fun with grey louries 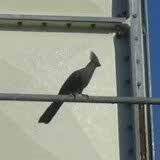 As all writers know there are times you wake up with the most brilliant idea since chocolate covered peanuts, push blankets and husbands to the side, plough through the wall of giant teenagers to get to the computer to write down the short story that will push you over the top, and make yours into a household name, at least among the hundred or so people around the world who read short stories.
Those first four lines are fabulous and then BLAMMO!- the neurons have lost power and the balance of your story has slumped in among the grey matter. There is no reason to be alarmed though, all you need is a rest and it will come back in all of its glory. Those resting times are when all conscientious writers need a list at hand of ways to fill in those unexpected minutes (hours, days, ….(shame)…. weeks???) and this is where “Things to do When Waiting to Write- Handy Tips” will come in … well … handy.
Today’s tip involves a gang of birds that have taken over my garden this winter. They are called grey louries. They’re big, fat birds with long tails and silly crests on their heads that they raise in a very dandy fashion whenever they speak that I find quite pretentious. They are slate grey with beady, black eyes- very Edgar Allan Poe-ish and move about in huge Hitchcock like flocks.
The first thing that makes them a good waste of time is their amazing un-gracefulness which can give any writer hours of fun and laughter. They are the clumsiest birds I have ever seen. They land on the branches of the ubiquitous Syringa trees in my garden (thanks to a former headmaster who occupied this house who, I believe, had an alter ego named ‘Johnny Syringa Seed’) with the tender grace of George W. doing his soft shoe routine in the Rose Garden. Then they totter back and forth precariously trying to regain balance often to no avail. I’ve watched them attempt to land on the edge of the bathtub where they drink, only to be overjoyed as they catapult themselves right into the water looking as stupid as a big, fat, wet grey bird can look. This is why I found it amusing to see this description of the grey lourie on Ask.Com:
Generally found in pairs, small family groups, or parties of three to 20 birds, hopping, climbing, and bounding about in trees and bushes with much dexterity. Alert and inquisitive, it will often perch on the topmost branches of trees with a marked upright posture, raising and depressing its crest, and jerking its tail as it calls.

And that is a perfect segue into the other reason wasting time on these birds is fun- they talk. The unimaginative claim they say “Go Away”, but I know better. In my waiting moments, between spurts of writing, I have heard them say things such as “Lauri get to work you lazy bum” and “Hey those bills won’t pay themselves” in that teenage, angst-filled voice they use- a whine with a twinge of anger and a sprinkling of “I didn’t ask to be born”. Deciphering what they are saying really can be a lot of fun and a very efficient time filler.

(NB: For writers outside of Southern Africa, I have been informed, thanks to Newman’s Birds of Southern Africa, that the grey lourie is found only in this region. For such writers, may I suggest filling those in between moments by reading this blog, which should work just as effectively? Check your watch, I’m telling the truth.)
Posted by Lauri at 12:11 PM