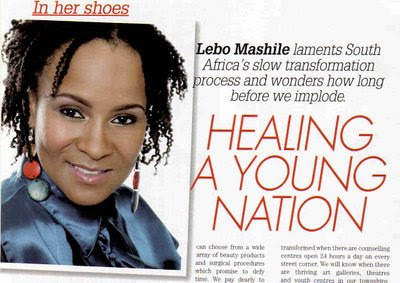 Today is Nelson Mandela’s 90th birthday. The world has been celebrating it for the last month and nowhere more frantically than in South Africa. South Africans hold onto Mandela with two hands and, with their blinders firmly in place, they hold him up as evidence that they have got through, that they are a country that has survived their past- but have they? One wonders what that country would be like without having the icon that is Madiba to hold onto like a security blanket. I often wonder how the country will cope once he’s gone.

In the August issue of True Love, the versatile and talented Lebo Mashile questions the shallowness of South Africa’s Rainbow Nation transformation. “We had the audacity to claim to be able to transcend 500 years of oppression with the help of some icons, a rainbow and a couple of carefully crafted tales of togetherness,” she says. The cracks in the lie of that transformation are beginning to widen and the conflict hidden just under the surface is seeping out. The recent xenophobic attacks in the townships are only the tip of the iceberg and an indication that the sugar coating is just not going to cut it for very much longer.

Mashile goes on to say, “Our nation is slowly waking up to the hard reality that you cannot heal a nation with cosmetic surgery. You cannot change a society with a few BEE deals and a few uber wealthy and powerful blacks. True transformation begins at an invisible level. It starts with intention.”

South Africa is a country of walking wounded. Damaged minds hide behind smiling faces. Until they take off their Mandela glasses and look clearly at the problems of race and economic segregation, nothing real will get accomplished. Just like a wound untended, infection will undoubtedly set in. It’s just a matter of time.
Posted by Lauri at 10:37 AM

There is a similar problem in Australia with our attempts at reconciliation with our Indigenous people. They just don't go far enough. Don't get me wrong, I thoroughly appreciate what the trailblazers and icons have done(I think Nelson Mandela is one of the truly great men of our lifetime) but when they are gone, what then?

I am enjoying reading your blog. Sorry it has taken me so long to get here. Hope you are well.

Thanks Selma. I love your blog BTW!

I wish there were more people like Nelson Mandela. And I also wish he had had at least a decade, preferably longer, to spend in office. He laid a phenomenal foundation, but what's been built since is top-heavy and fraught with corruption and cut-corners. I hope the foundations remain when it topples, but I do see the need to start again practically from scratch.