Bitches’ Brew- Not what I expected. 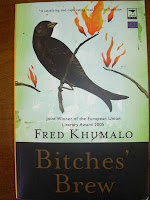 There is an adage that says you can’t judge a book by its cover. Bitches’ Brew by Fred Khumalo is a perfect example of that. The cover, both the black bird and the blurb at the back only make reference really to what happens in the last 10 odd pages of the book. I found this a bit deceiving. I thought the book was going to be a love story about Lettie and Zakes. I thought it was going to be about “turbulent revelations of character with a pervasive complexity that is both utterly absorbing and incredibly touching”. It is not.

If there is love between Lettie and Zakes, it is not a kind that most women would appreciate, in fact, domestic violence counsellors would have long advised Lettie to get away from Zakes. An example of their relationship- Lettie and Zakes are about to be married. She realises he has gone missing and goes off to look for him. She finds him having sex with another woman. Now comes the unbelievable part. She chases the woman off and takes her place. Obviously a book blatantly written by a man with little empathy for his female character.

I’m not a prude; I believe sex and sexuality should be used effectively in fiction. That is not the case in Bitches’ Brew. There is a scene early on in the book where girls are dancing at a wedding and they are not wearing underwear under short skirts. Khumalo goes into pointless detail about this, almost pornographically so. Violence against women in this book is glossed over and not important. The love story I expected was not believable nor brought out well throughout the book. The whole bit about the son at the end is oddly tacked on.
It is said to be an honest look at township life, I wouldn't know if that is the case. If indeed it is honest, there is no depth to it. Just a shallow tour of meanness, violence, and crime.

Like so many Jacana titles, the editing is quite poor. It really is a big let down when editing distracts the reader as it does in this book. They must really work on this, it is ruining so many potentially good books. Khumalo is a good writer. Anyone who reads his Sunday Times column would likely agree to this. This book could have been so much better.
Posted by Lauri at 12:15 PM

Like so many Jacana titles, the editing is quite poor...

Oh, this really scares me, Lauri... I'm sure you know why!

JD don't be scared. If the book is well written even with poor editing it needs to be said. (I'm half through and I'm liking it-BTW) I've been the victim of poor editing many times so I empathise with all writers who must endure it.