Freedom of Expression Under Attack in Botswana 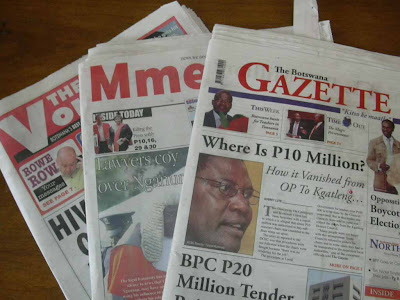 If the Media Practitioners Bill, soon to be brought before Parliament in Botswana, is passed, I will be duly arrested for writing this blog entry and given a fine of not more than P5000 or 3 years in prison or, if I’m unlucky- both.

The bill states that anyone, writing anything about Botswana while residing in the country must be accredited. And who will decide if I am suitably qualified to write? The Minister of Communications, Science and Technology- a political appointee -who would likely not appreciate any dissenting voices. I’m sure if I tow the line, accreditation will be forthcoming, but I loathe to do so under the best circumstances and tend to scrap the line altogether when I’m being bullied to behave accordingly. It is easy to see the Zimbabwe-ish way that this is heading. I’m nervous. Those orange jumpsuits really will not suit me and I barely have money to pay for my internet, let alone pop out 5000 bucks every time I sit down to write.

The Media Institute of Southern Africa (MISA) Botswana chapter has issued a position paper on the proposed bill. What really is quite unfathomable is that the government had consulted with the media fraternity before drafting the bill. Many things were agreed upon. For example, the media have their own self regulating Press Council which has been doing a good job to date. It was agreed between government and the media that the Press Council would remain independent and self regulatory and that any legislation would be only to give the Press Council legal recognition under the eyes of the government. When the Bill came out it is as if those meetings didn’t even happen. The Press Council envisioned by the Minister would be appointed by her. It would be completely under the control of the government.

So now the government will choose who will regulate the press. They will choose who will write the news stories. This flies in the face of the very concept of freedom of the press. It is an affront to our constitution and all international agreements on freedom of expression and a free independent press. All patriotic Batswana who love the long standing tradition of free debate that is an entrenched part of Setswana culture and the culture of a free democracy must speak out against this Bill. If not I fear for what lies ahead.

Want to express your outrage? Send a letter to our only private daily newspaper Mmegi Editor: editor@mmegi.bw
Posted by Lauri at 1:33 PM

(Otherwise, there's only one thing to do: move to Scotland and get a double-barrel surname...)