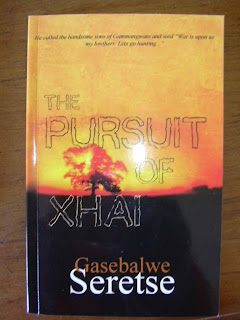 When I came to Botswana in 1989, it was common place for the San/Bushmen to be referred to as Lesarwa/Masarwa; le-/ma- being the singular and plural in Setswana for a noun class that is mostly reserved for things. As time passed, it became politically incorrect to use such terms and now Mosarwa/ Basarwa are the correct terms to be used. Unfortunately, linguistic equality did not equal true equality. Like in many cases, it was often little more than window dressing. Racism against the first people of Southern Africa is still thoroughly entrenched. which can be easily seen as Roy Sesana, the well known representative for the Basarwa in Botswana, mentioned in his interview in The Voice newspaper this last Friday when he said, “The government has always talked of developing Basarwa, but where are developed Basarwa? Do you see Basarwa teachers, nurses, doctors, wildlife rangers or engineers?” The answer is no, which is the sad and sorry truth, and no intervention by misguided groups like the British based Survival International can correct that. It is a problem that Batswana must address on their own. Gasebalwe Seretse has begun that journey with his exceptional book, The Pursuit of Xhai.

The book looks without blinders at the racism of the Bangwato toward the Basarwa. Sir Seretse Khama, Botswana’s first president, was a chief in this tribe, as is our current president, his son, President Ian Khama. The author himself is also a member of the royal family of this tribe, which makes it all the more exceptional that he tackles the issue in such a forthright manner.

The story is set in the capital of the Bangwato, Serowe, and is about the wealthy Mongwato cattle baron, Sebeso, who sets out in search of the handsome, Mosarwa man, Xhai, who has been carrying on a forbidden love affair with Sebeso’s daughter Tshepo. Sebeso is most affronted that a “Masarwa dog” has thought he could disrespect Bangwato it such a way. His search for justice leads him to untold horrors and eventually his own demise.

Seretse shows explicitly the hierarchy, which includes other tribes such as the Bakgalagadi, Bakalanga and Barotsi, that was common place at the time (the book is set in 1965) with Bangwato firmly placed on top and how belief in the status quo was universal throughout the villagers of Serowe.

Another interesting issue arises from the character Mr. Sykes. He is a retired, white, British magistrate who is also a friend to Sebeso. Sebeso and his friends berate the whites for arriving in Botswana and banning the outright enslavement of Basarwa by the Bangwato. They discuss how the whites, who do not understand the situation, should have kept out of it. They blame them for allowing the Basarwa to believe that they can be equal to the Bangwato. At the same time Sykes, in his own mind, is vehemently racist against the Bangwato and all blacks and fears for the impending independence of the country. (Botswana got independence in 1966).

Seretse has another book (strangely described as a novel at the back of this one) about the infamous Tshekedi Khama called Tshekedi Khama: The Master Whose Dogs Barked At.