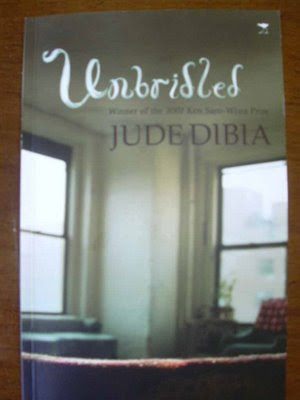 Unbridled is the second book of up and coming Nigerian writer, Jude Dibia. The book is about Ngozi, a young Nigerian woman with a troubled past who searches for an exit from her life on an online dating site. She discovers what she believes to be her “Prince Charming” in a British man called James and dropping her name for a new one (Erika), she sets off for Europe to marry a man she has never met.

Dibia is expert at using the manipulation of time in his plot so as to set up suspense. He gives us drips of Ngozi’s past without telling us what horrors lie there. Straight away he jumps forward and she is already coming back to Nigeria, but the reader doesn’t know why nor what transpired in the UK. Like a pendulum, the reader is swung back and forth in time being given the bits and pieces of the story in enticing little bites. That seasoned handling of the plot makes this book something special.

Many have commented on the authenticity of Ngozi’s female voice coming from a male writer. It is true, Dibia seems to have a unique insight into the female psyche, but I loathe mentioning it (though, obviously, I already have). To me it’s a bit like the accolades that fall on men who stay home and take care of their children while their women go out and work. Women writers write authentic male characters all of the time. So I will not give Dibia any kudos for his undoubted skill in this area.

There are many lovely bits of writing in this book. An example-“I finally understood what it meant to let go. And like many women, I imagined, who had been physically and emotionally abused by men, what letting go meant was to simply vanish into the shadows where the past could not catch up ever again with the future.”
Posted by Lauri at 12:21 PM

Beautiful, Lauri. I am so happy you made it through to the end. The play on time was crucial to the plot/story.

JD
I really loved Providence. How nice to have a good, strong, positive African man saving the day!
L

Thanks, Lauri. LOL...I'm not sure about Providence saving the day, but I was concious of creating a balance for all the crazy male characters that were introduced in the course of the story.

Every reader I have had the opportunity to interact with always mentions Providence... it is nice to know that he made an impact on people.

I just read Unbridled two days ago in one sitting, What a gem of a book, and such attention to style Never heard of Jude before and just assumed (he) was a woman I could relate to. I'm off to look for his other offerings!